A few people* have asked if I ever give lessons and I thought it was high time I put up a few tips on ukulele playing.  This is purely for beginners, so please take what you like from it and always remember: music making is fun and if you put in a little bit of effort at the beginning - it'll pay off in spades later (or your money back).

Its also a great ice breaker and could make you a hit at parties…….but lets not get ahead of ourselves!

Getting started and practicing

Me? I always hated to practice, so I'd just leave my ukulele lying around the house and strum it a little, in front of the TV, while cooking food, on the phone (hands free!), even in the bath (it was a cheap one).  It worked for me and I never did learn to “practice” - but I did get a lot better. 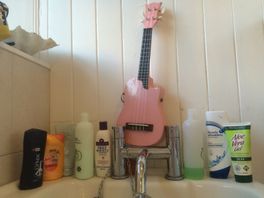 Bear in mind also that the uke works very well with the human voice (singing is good for you!) so don't be afraid to sing while you play!  Everybody has to start somewhere, even the Ukulele Orchestra of Great Britain was just a bunch of friends who got together to strum every Wednesday, it is always more fun to play with others.

Buying a Uke, What type of Uke should I buy?

Just like any family of instruments, there are several different sizes: soprano, concert, tenor, baritone.......... even bass!  For our purposes though, I’d recommend starting off with a soprano uke and while there are plenty of cheap ones around, nearly all of them have fairly good intonation - unlike yesteryear when I started.  Two good entry level ukes are the Lanikai LU-21 and the Kala KA-S which you can by online or order at your local music store.

Me? I play a soprano ukulele by Welsh Maker Pete Howlett, but they’re a little more expensive.

Are you left handed or right handed?  Either way its fairly simple to hold your uke - if you’re sitting, just rest it on your knee while you’re strumming.  If you’re standing up hold it under your strumming forearm on one side and your chord playing hand on the other. 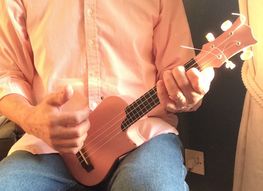 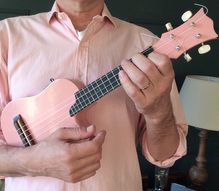 The most common tuning on the soprano is GCEA and the ukulele traditionally uses RE ENTRANT or 'Hawaiian' tuning.

Here's how all the strings sound together,  Uke players sing "MY DOG HAS FLEAS" to remember it

Pick, Pluck or Strum? - how about giving it the finger!

There are lots of ways to play your ukulele: with a felt or plastic pick, with the backs of your fingernails, or just with the pads of your fingers.  I'd recommend using your forefinger and gently brushing up and down on the strings while you get comfortable with the instrument. 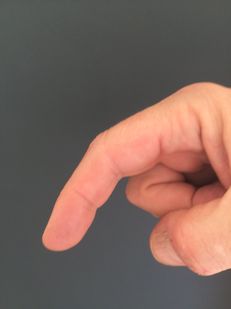 Chords - the building blocks of a song

Chords are the combinations of notes that go together in harmony to provide a "bed" or "backing' for your singing.  The easiest chord of the lot is most definitely the C chord, which uses only one finger  C_Chord.aif 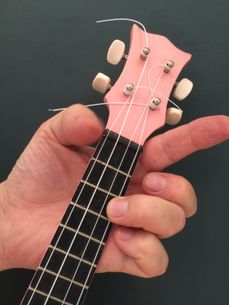 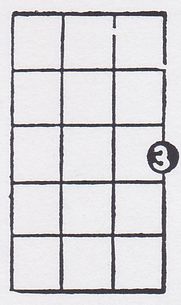 Most beginners use chord boxes or "windows' which show how to finger the chords.  Here's some examples of chord boxes and they are easilly obtained from most ukulele internet sites.  Some are harder than others - lets try and learn a few chords so we can have a go at a song - it'll be a children's song so you can start by being a sensation at children parties.

If it starts to hurt, don't worry - carry on till you pass out...seriously though, a little and often is better than a lot at once.  What you want and what you will get after a while is "muscle memory" whereby you will see the name of the chord and your fingers will instantly make that shape and it'll become almost unconcious - after a while it'll feel like you could play and be unconscious at the same time.....just kidding! 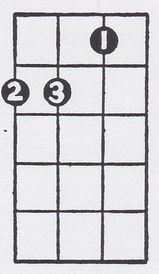 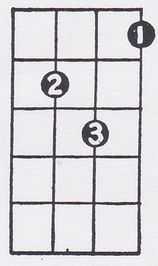 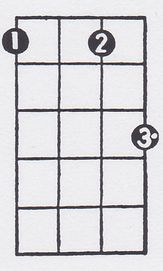 Lets have a go at a simple song 'He's got the whole world in his hands" - its got two chords in it F major and C Major: - here's how I would play it:

Not bad for a first effort - just remember that more chords you learn the more interesting songs you can play.

Lets play another song that has only two chords: one minor and one major, maybe you know it  "What shall we do with the Drunken Sailor - heres how I play it using A Minor and G Major 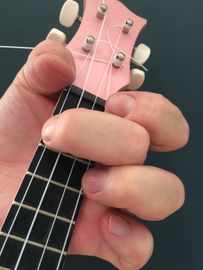 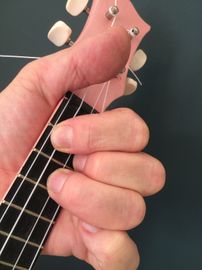 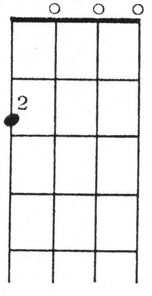 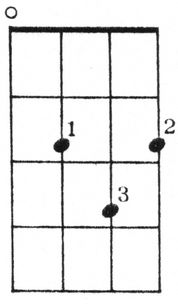 Early in the morning

Early in the morning

Master these and you'll be able to play everything from Coming Round The Mountain* to Kumbaya and yes, Cinders, the ball awaits you and your trusty ukulele!  Lets have a go at another simple song: - Clementine , which has two chords - C and G7.

In a cavern, in a canyon, Excavating for a mine

Lived a miner, 49er and his daughter Clementine

Thou art lost and gone for ever dreadful sorry Clementine

That sounds pretty good!  Lets ramp up the pressure and try a three chord song: Twinkle Twinkle Little Star.  Here's how I play it -

How I wonder what you are

Up above the world so high

How I wonder what you are

Well there you have it, you now know 4 songs, a bunch of chords and are ready to go out into the ukulele world and let 'em have it.  Good Luck my ukulele friend and if you have any feedback ping me an email: penultimate@tonypenultimate.co.uk

* Complete and utter fabrication: nobody has asked - I just thought I'd put 'em up anyway!

* Coming Round The Mountain is actually 5 chords

Support the ATTC and the blog