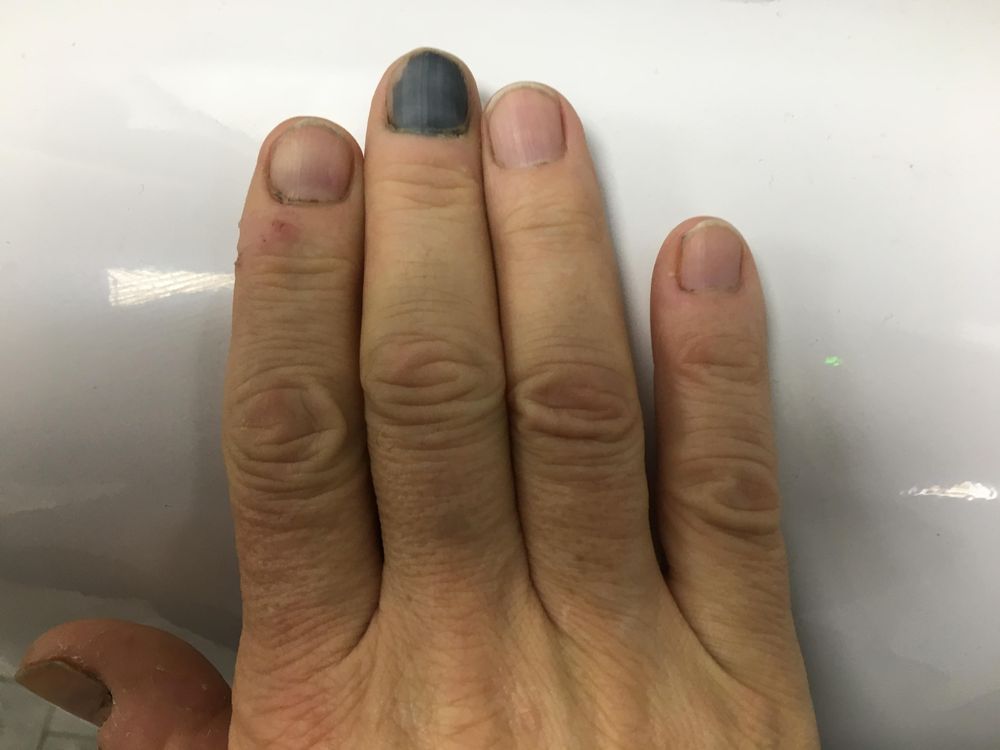 Several people have asked me if I've started painting a single fingernail in the modern style, and I've had to point out that it is, in fact, a bruise under my nail, from when I banged my hand in the hotel door in Helsinki a week ago. Fortunately it dosen't hurt or anything and apologies for grossing you out. 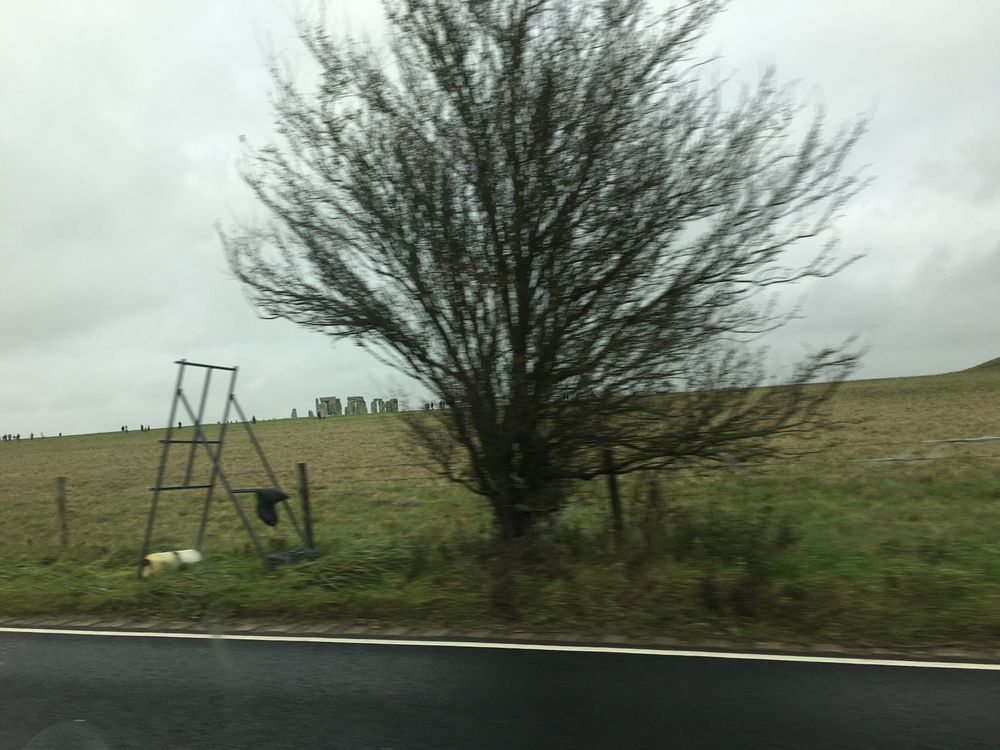 Since returning. the week has passed fairly quietly - I discovered that I been photographed speeding on the way to the High Wycombe gig, so I'll have to go and do a 'speeding course' to keep points off my driving licence. Here you see me passing the ancient monument Stonehenge on my way to our two gigs in Bath and Cheltenham (both Spa towns - so I've rolled them into one blog). 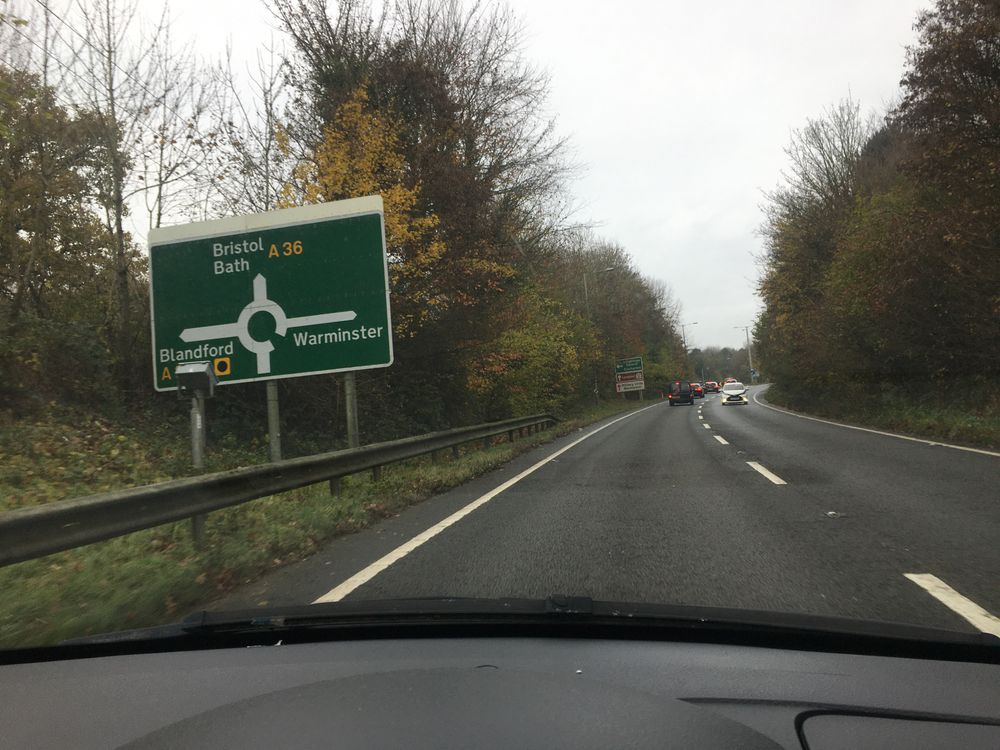 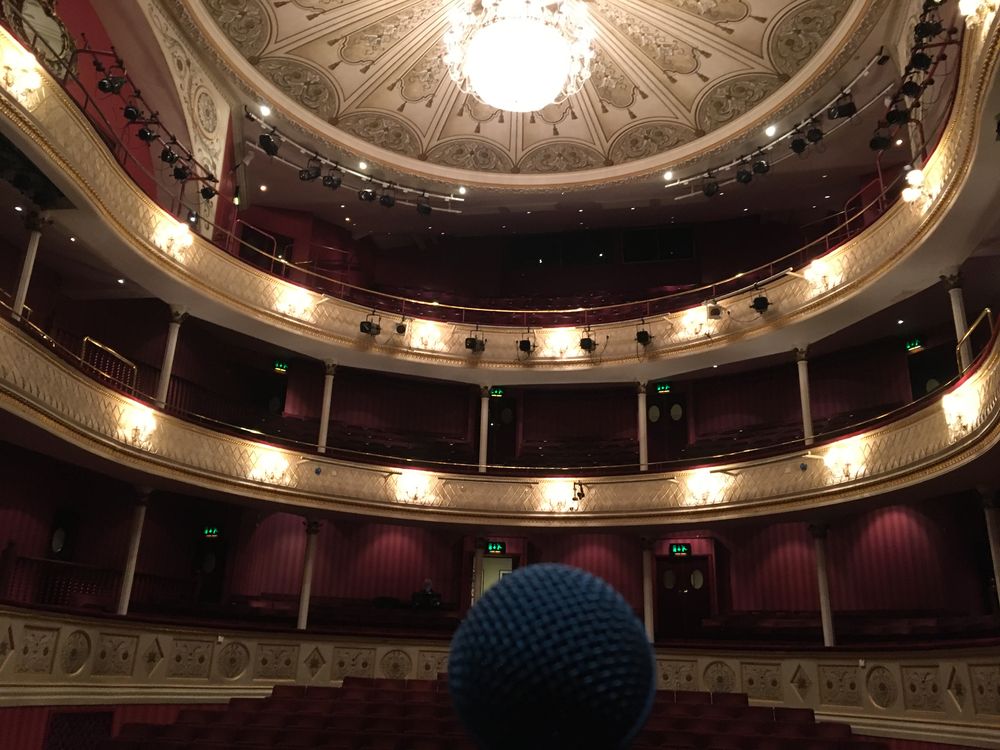 According to this blog - the last time we played Bath was in 2017 and we did two shows as well - it was the same again this year, its a lovely auditorium. 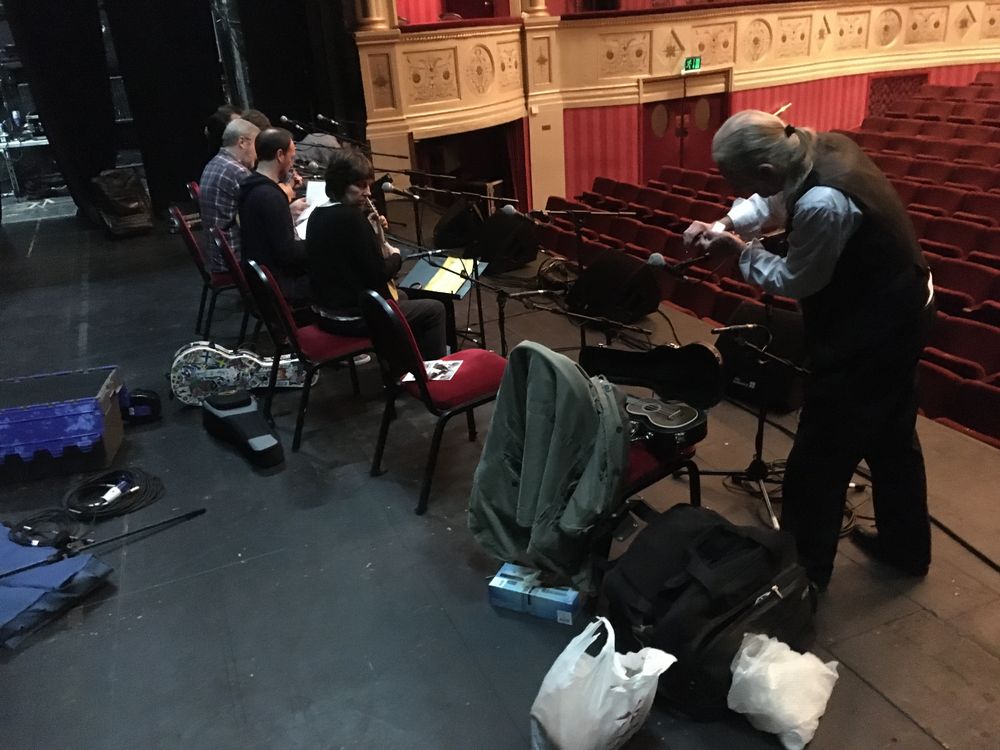 Our Christmas singalong/playalong has been going well and non players don't seem to mind the house lights going up several times through the show, as we invite peeps to strum along. 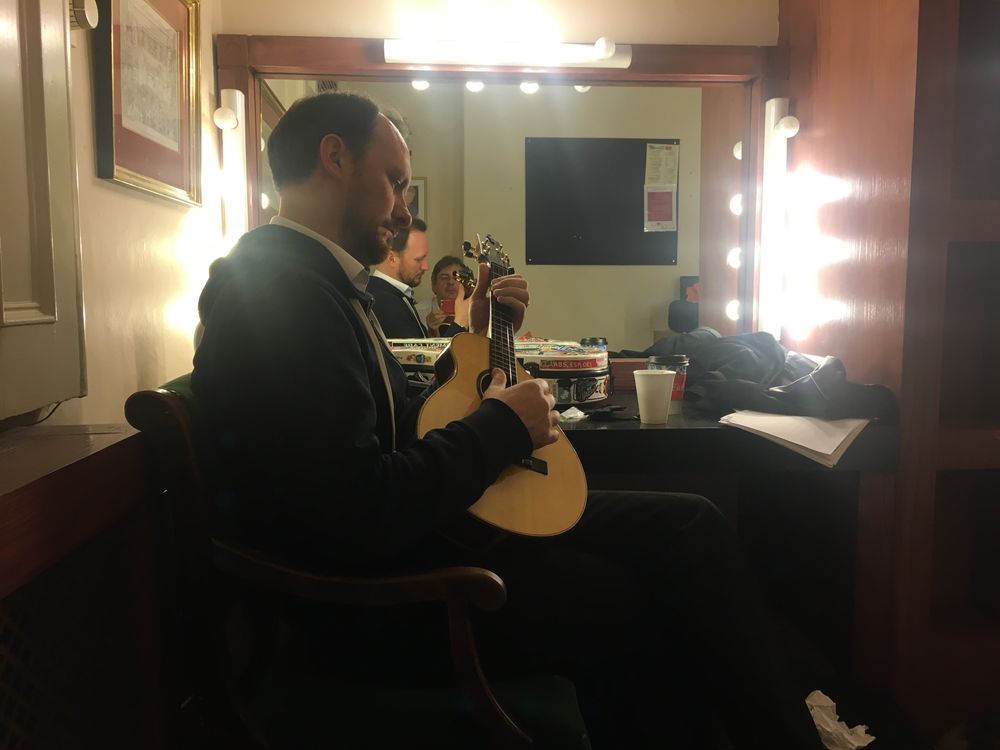 Ben, still the 'new boy' of the band, despite having been in it for almost four years, and is a conscientious practicer - he does most of the 'heavy lifting' that George used to do - ie all the lead lines. 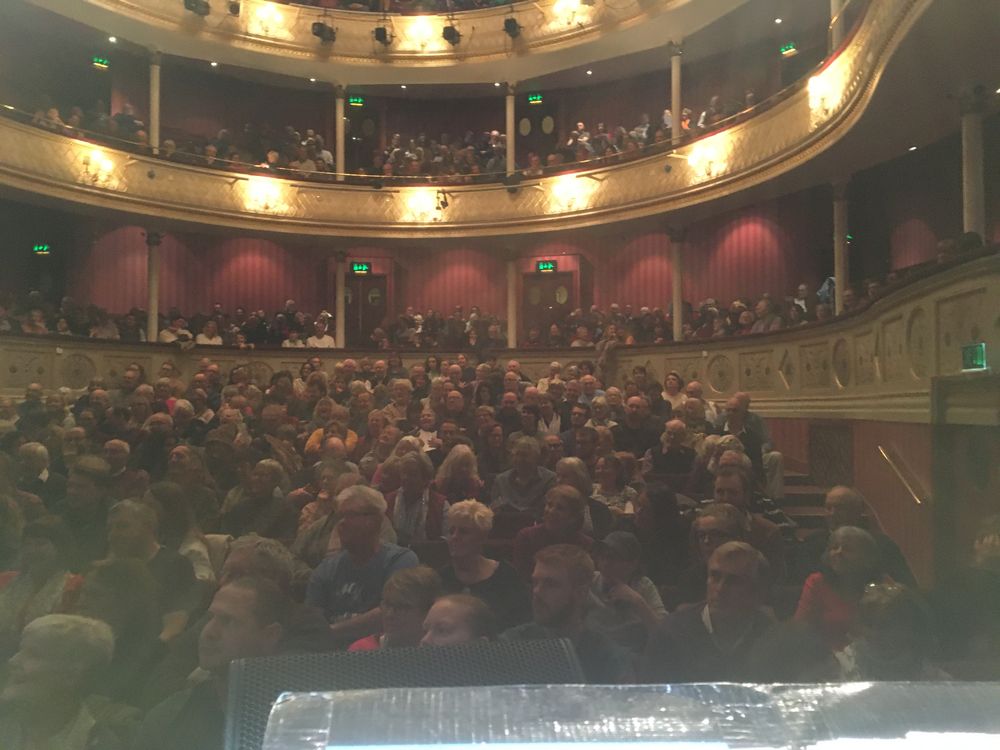 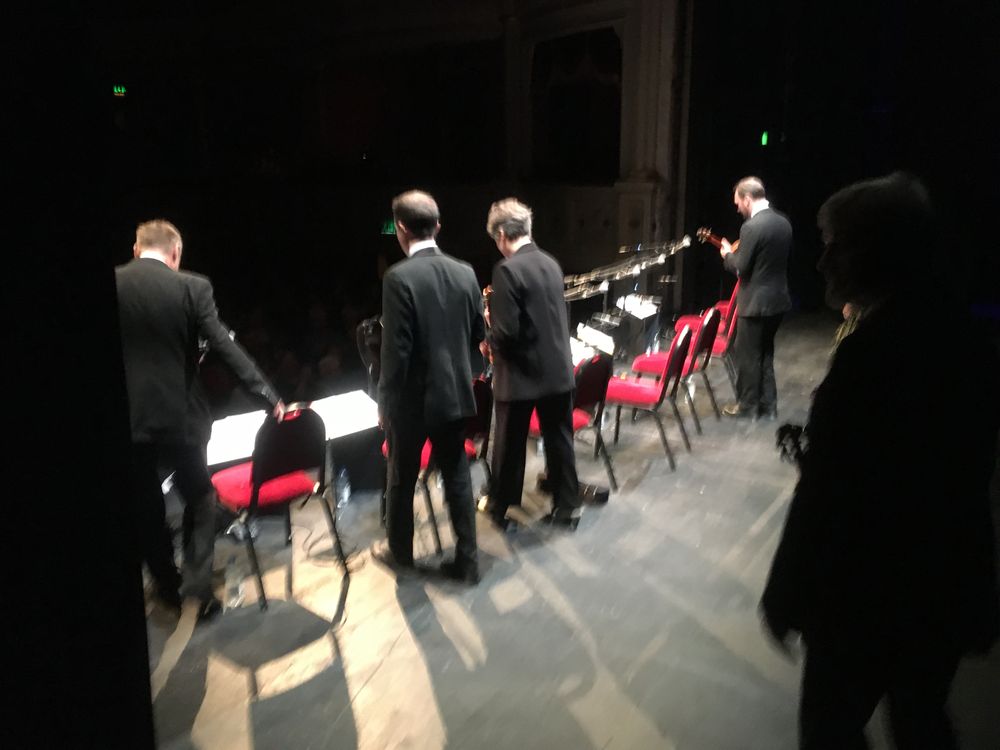 Both shows went down well, although you do have to pace yourself throughout the afternoon and evening - I was pretty knackered by the end of it. We then walked to the hotel, which was just round the corner.

While we were walking, a funny thing happened, a woman approached Jonty (probably because of his bass case, ie a musician) and asked him if he'd like to buy a 'joint'. Everybody who knows Jonty can testify that he is a model of sobriety and retains a general monkish demeanour. However, purely in the spirit of idle banter, Jonty asked what it was, grass, hash or skunk? The woman then produced a leg of lamb that she had nicked from the local supermarket! 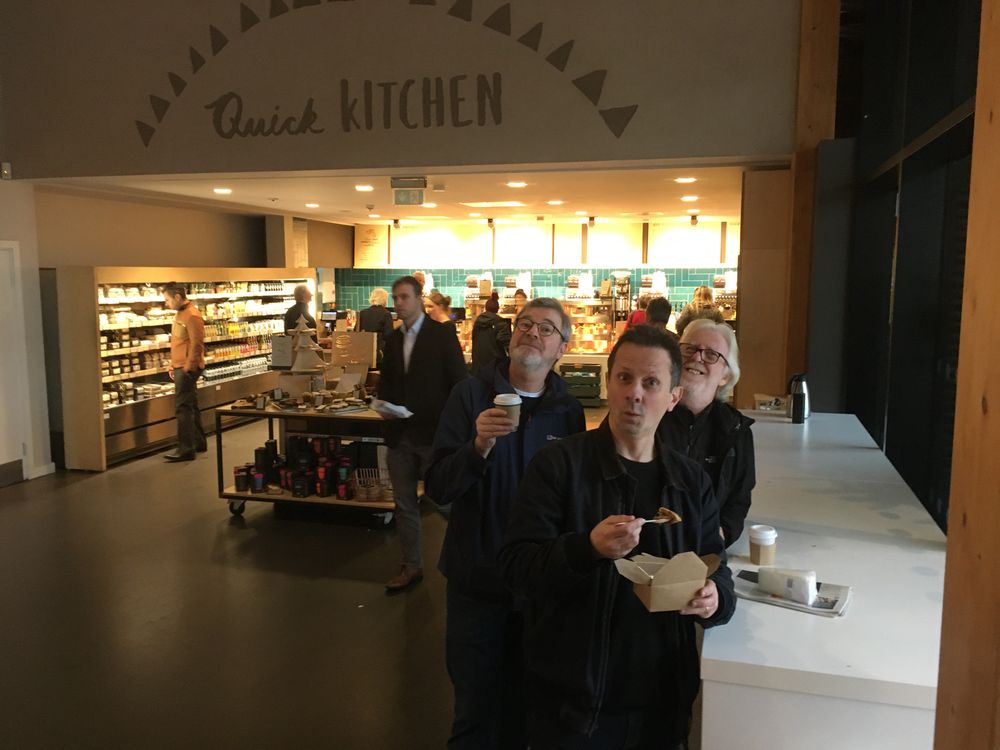 The next day dawned bright and breezy and I gave Will a lift to Cheltenham or 'Nam as Dave calls it, as in "If you think we're looking tired, its because we've just got back from "Nam - Cheltenham"). A fairly unremarkable journey. We bumped into Richie and Doug at a local service station (I can't take much more of this excitement). 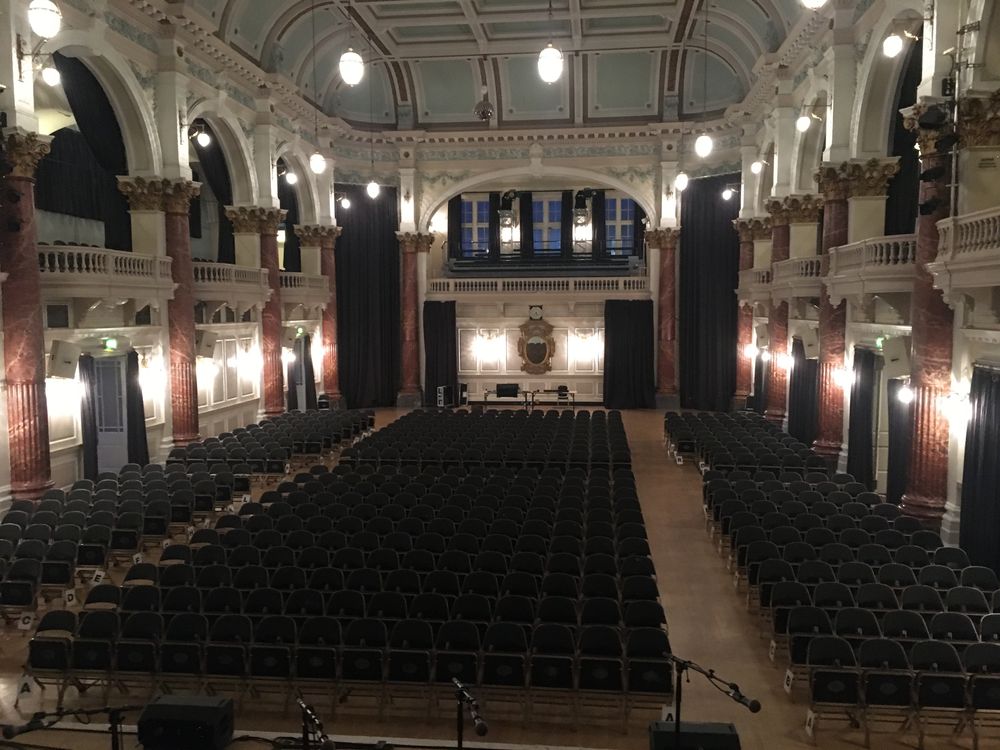 Once again, we've played this joint (sorry, palatial auditorium) many times before. 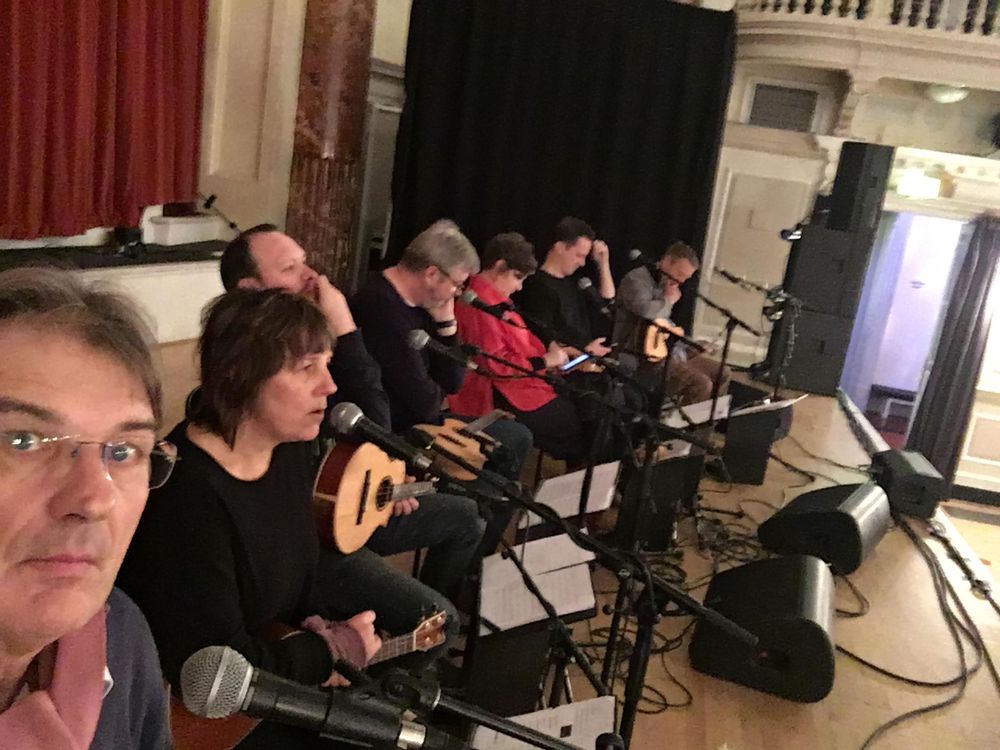 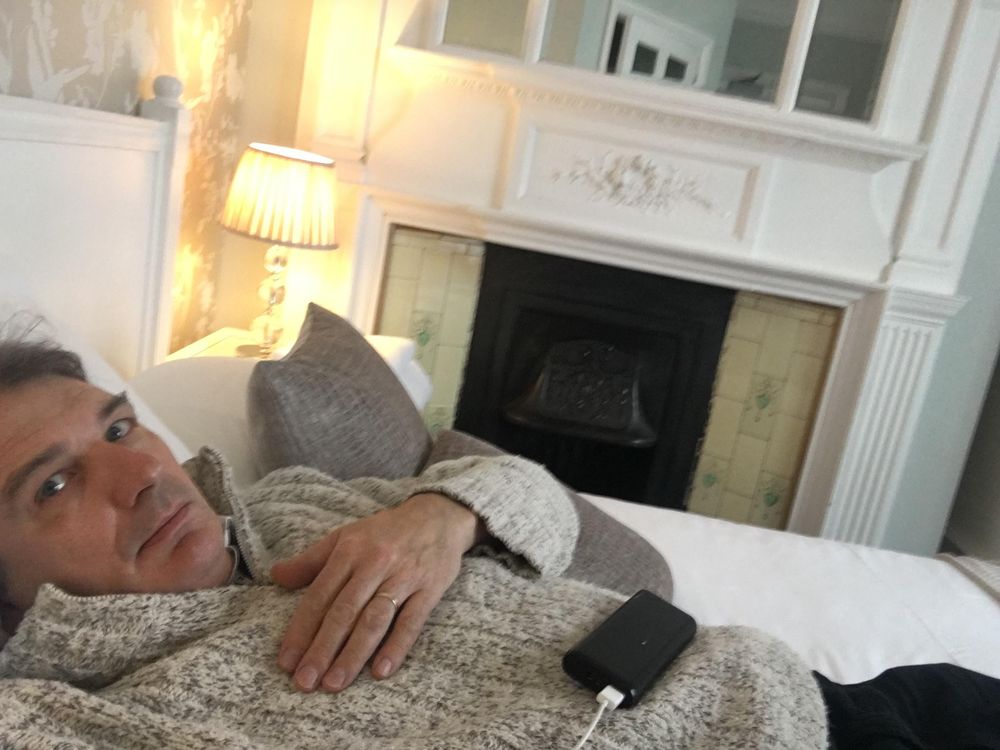 After which I wandered back to the hotel and tried to get a doze as I'd had a terrible nights sleep last night. 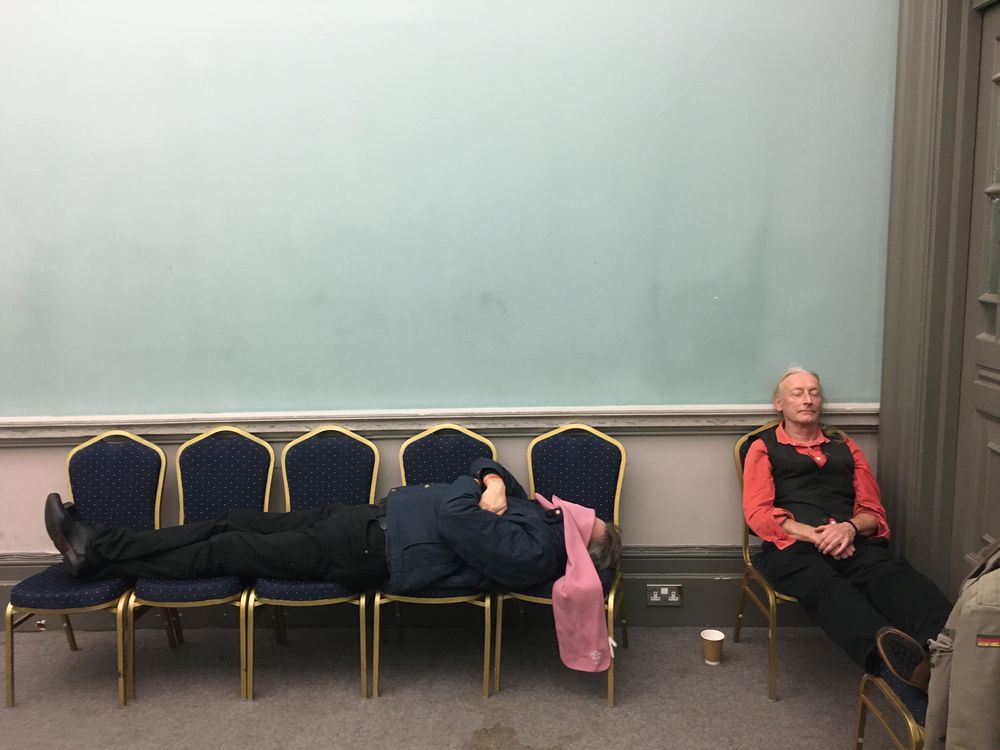 When that didn't work, I wandered over to the theatre and tried to get a doze on a bunch of chairs there. 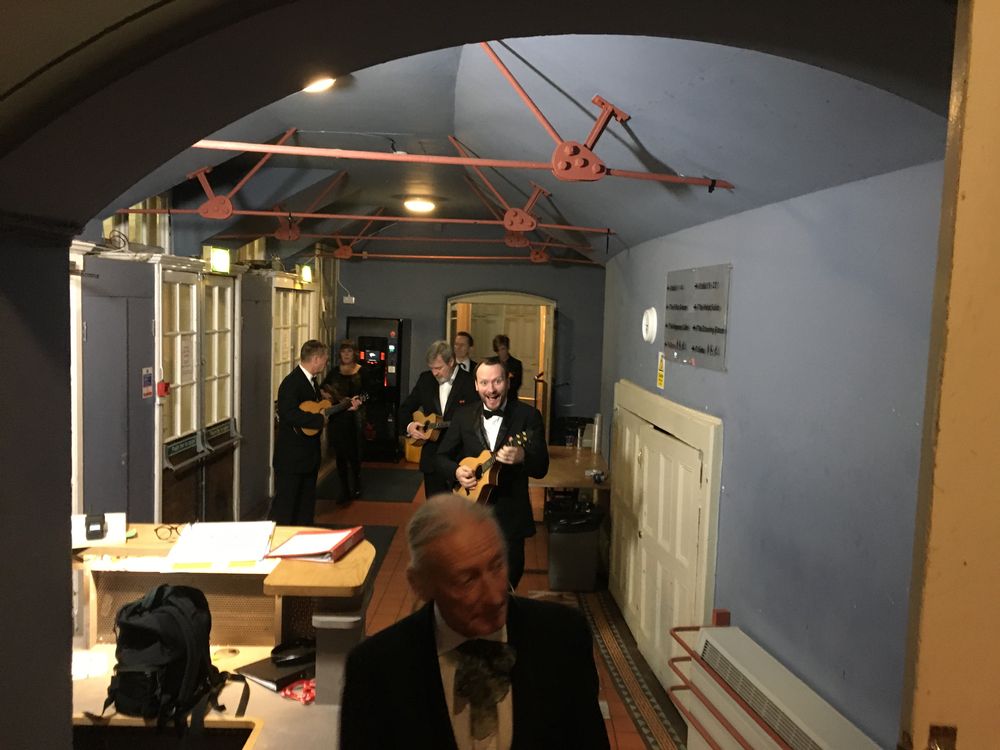 Getting ready to go on. 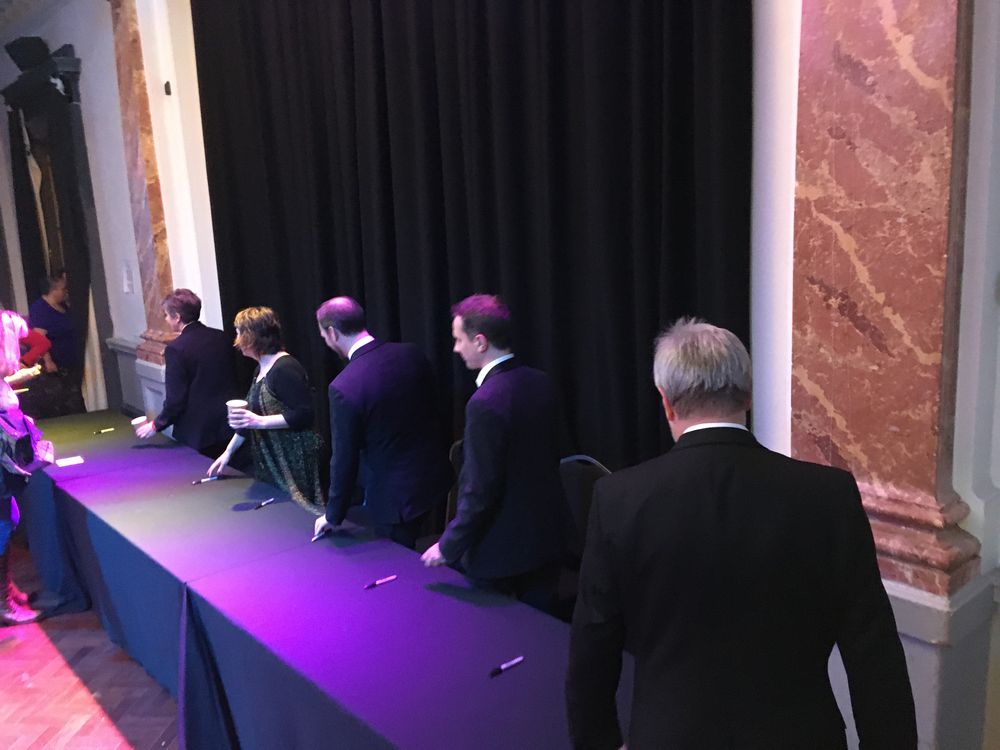 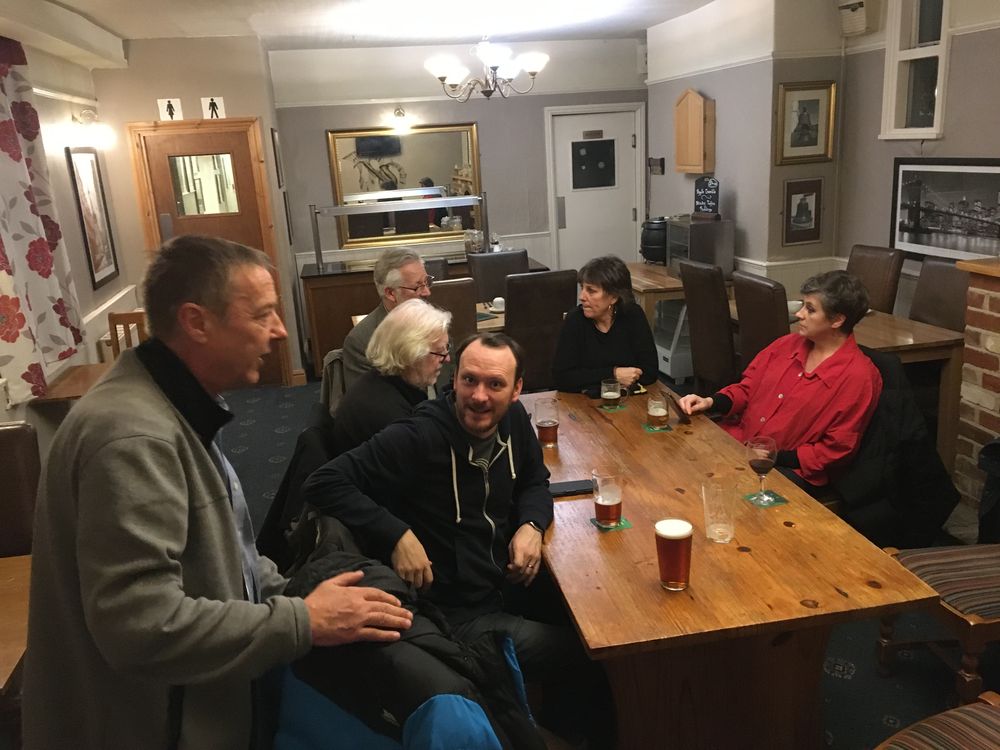 After the show we went to a pub round the corner for a drink before going back to the hotel.  The next day I drove home, all the way from the West of England to the East of England in the pissing rain. I'm sure you can give your trusty correspondent the next gig off, as I'm nursing a raging cold, writing this up on the train to Cambridge - and if you can't here's what I wrote about our last show in Cambridge

I've also got a new film dropping on Friday about my episode of meningitis a few years ago when I very nearly died. I'll post it here and on Facebook and youtube. 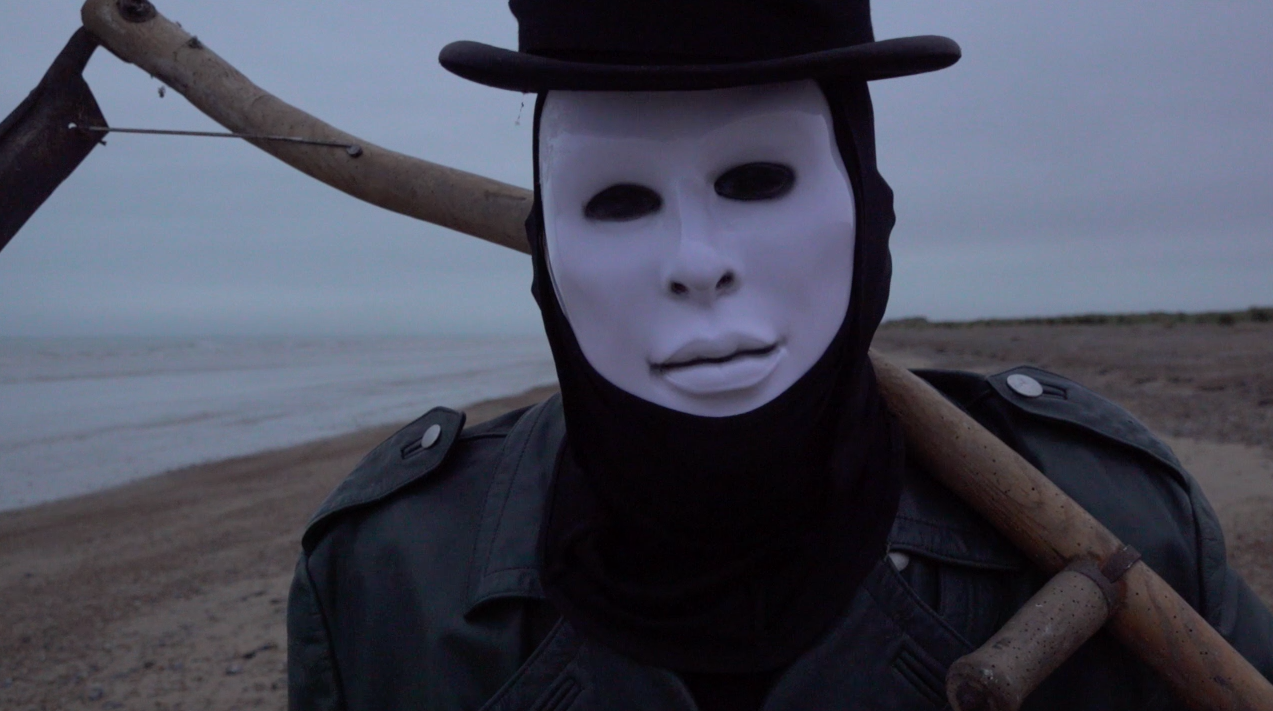