The Ballad of Hopkins McGruder

It’s been a couple of years since I wrote an essay on the ATTC so I might as well update it and bring you up to speed. For new people - I started this project, with the proposition that touring will eventually drive you insane. Constant repetition demands some break from the norm, in a world of constant change (travelling, hotel room, backstage - press repeat) one needs some sort of project/discipline that will focus the mind. That is why I write a tour blog, despite sometimes being bug eyed with tiredness and why I continue to make films in Airline Toilets. 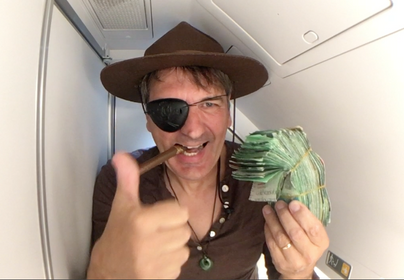 Brian Eno was probably right; the father of ambient music and celebrity producer had postulated that what us (ahem) ‘artists’ need to do these days are to set ourselves more limits on our creative tasks. The endless capacity of digital technology to augment, improve, magnify our audio, films, lives, means that quite often the choices are endless and mediocrity is the result.

Three years into this project, I’m a bit ambivalent in regard to his comments. On the one hand it would be impossible to make these ATTC films without a mobile phone, my main tool (innocent and inconspicuous) on the other hand, I’ve limited myself to making music videos in a space barely the same size as a conventional shower and in an environment that is severely ‘time limited’ - ie not much time for 'retakes'. 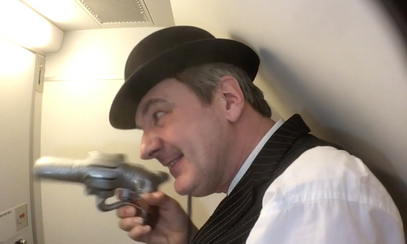 So I stepped back and had a think…….

Ok, so what can you do in an airline toilet to make an interesting film?

You can tell a story - but hang on I’m a musician?

Ok, you can sing a story - a story song!

Well - ‘The Ballad of Hopkins McGruder’ came from sitting down and thinking what would be the most incongruous thing that could happen on an airplane?

And then it hit me. Cowboys! Shooting! The Gunfight at the OK Corral!

Ok, so now we’re getting somewhere..

I’d need to write and record a cowboy song, ‘act’ the parts of all the characters in the song, get footage outside the toilet (i.e. passengers reactions) to make it look more effective. 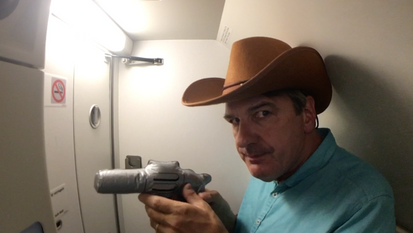 But wait a moment - I’m in a touring band with eight bandmates who are all just as bored as I am, and don’t mind lending a hand acting ‘scared’. 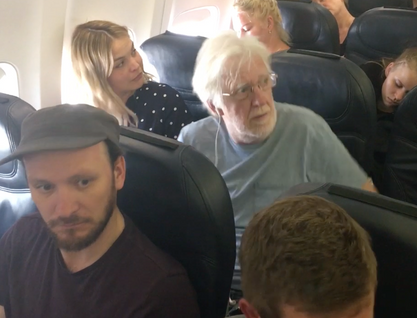 Well this is the result and its been damn hard work - 13 flights.  Most of my friends have been aghast at the prospect of me being busted/discovered and its true; - there are some uncomfortable parallels with modern terrorism - a single, ‘lone wolf’ style obsessive, fanatically convinced that his actions will profit humanity.
But, as time has gone on I've become more relaxed and more stealthy, should I ever find myself in front of a judge, banned from an airline or face down and handcuffed on a flight, I will simply remember the words of Dr Samuel Johnson, who upon hearing of the death of his friend, actor David Garrick said that it ‘has eclipsed the gaiety of nations and impoverished the public stock of harmless pleasure’. 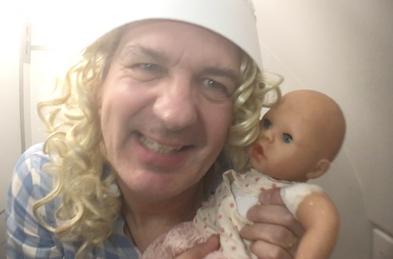 As for my mental health - am I going mad or is this project keeping me sane?  I often thinking of the old joke about the man ripping up newspapers on a park bench to keep the pink elephants away…
A passer by stops and asking why he’s doing it and says:
But there aren’t any pink elephants!

And the man says: 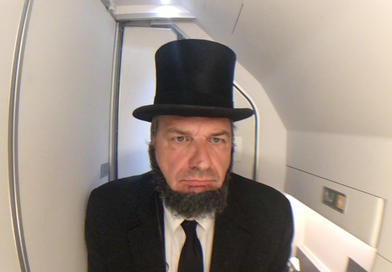 You can watch the film here